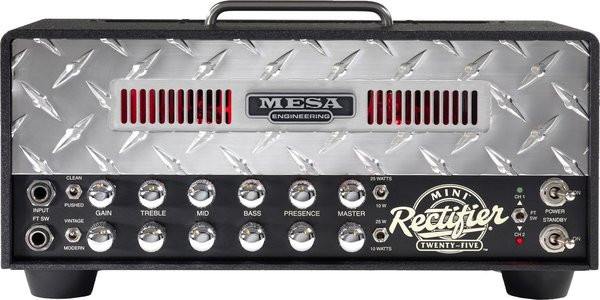 The Mini Rectifier Twenty Five rides atop a 20-year legacy of world-class high gain performance and hit-making sounds that have been at the core of - and even a catalyst for - some of the very best of Modern Rock. You will quickly find that its Mini moniker and physical size bear no resemblance to its stature, power and command over blistering, tight overdrive in the realm of big gain Tone.Don't think for a moment this is a trendy down-line toy or marketing-derived imitation of our mighty Recto. This is the real deal... in every way a high-end instrument. Lurking within this expensive metal chassis, lies one of our most expressive and nuance-enhancing circuits to date and it creates an exciting, adrenaline-producing Tone machine... one of the most fun to play in the entire MESA collection.Whether you're rockin' hard or putting the immense versatility of the Mini's four Modes to bear on a variety of styles, you'll get years of inspiration and enjoyment from this little gas-in-glass-powered jewel. We always strive to build classics, icons that you'll treasure amongst your most valuable musical instruments. From the feedback we've received thus far... it seems the Mini Recto is on its way toward achieving that status.